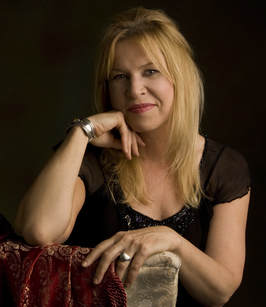 My interests in non-ordinary states of consciousness and women's spirituality are rooted in early childhood experiences. A couple memories, in particular, influenced me to explore women's connections to the imaginal and the divine. I can still vividly recall gazing in awe at the blue-cloaked statue of the Virgin Mary on my mother's bedroom dresser, sensing her majesty and absorbing her emanations of peace and spacious love. This experience left an indelible impression on me to this day. Another significant memory was of being filled with utter bliss while imagining I was a winged fairy waving my magic wand circling our home in rural New England.

During school, I found it puzzling and sad that historical references to women's contributions were ignored and no one was talking about it. This observation led to my later interests in feminism and the study of women's spirituality, archaeomythology and folklore.

Avidly curious about the workings of the mind since a young age, I used to pour over psychology books for hours at the local library trying to make sense of things. Then, at fourteen, I discovered the writings of Alan Watts which proved to be a pivotal point that set me on a lifetime course inspired by Eastern thought. I found memorizing passages from "The Way of Zen" helped stabilize my young teenager's mind offering me direction and clarity. Directly after high school, I moved to the Haight-Ashbury district of San Francisco, the heart of the Counterculture Movement. I communed with like-minded seekers, many whom were also studying Eastern religions, began a meditation practice and learned about various East/West healing methods (massage, hatha yoga, astrology, Gestalt, Rolfing, etc.), as well as experimented with hallucinogens, creative dress, free-spirited dance, vegetarianism and holistic living. This period continues to have a liberating influence on me and reminds me 'to follow my bliss,' as Joseph Campbell would say, and not forget to have some fun.

Growing interest in Eastern thought and ancient healing traditions, as well as women's mystery religions, led me to travel to sites dedicated to goddesses in Greece, female deities and dakini sites in India and Nepal, as well as to lands associated with the ancient Amazons in Eastern Europe and Russia. Years later, I turned my attention to the study of women's roles in mythology, folklore, ritualistic practices and oral traditions. Insights from these investigations have contributed to a 'personal mythology,' enabling me to piece together the puzzle of how, when, why and where women's agency got disenfranchised and to reconnect with my spiritual and ancestral roots. Through my studies I earned degrees in Archaeomythology (B.A), Women's Spirituality (M.A.) and a Ph.D. in Philosophy and Religion with a concentration in Transformation and Consciousness from the California Institute of Integral Studies, San Francisco.

In 1992,  out of the blue—completely unexpected—I experienced a powerful spiritual emergence. Through a series of frequent spontaneous lucid dreams that lasted well over thirteen years, I met with spiritual teachers and wisdom guides in various forms and received healings, transmissions and gifts of insight. I wrote an account of these experiences in my book "Guardians of the Gate: An Investigation of Numinous Presence, 'Visions of the Divine,' in Dreams," based on my doctoral dissertation.

Currently, I continue to investigate the archaeomythology of ancient goddess cultures and folklore traditions in Eastern Europe. In my private counseling/healing practice I incorporate methods derived from Buddhism, Bon, Shamanism and East/West Psychology with hypnotherapy for clients with a spiritual focus, as well as periodically offer private pilgrimage and study tours to Nepal. Presently, I reside in Kathmandu, Nepal with my husband British artist, Christopher Castle.